That's right: Canada actually has less gravity than it's supposed to. The reasons for the shortage have puzzled scientists for decades. Gravity isn't uniform all over the Earth's surface. It's a result of mass, which means the varying density of the Earth at different locations can affect how much you weigh there. 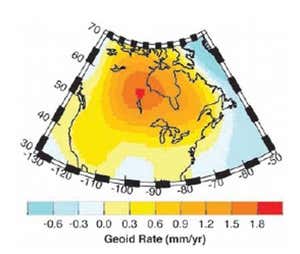 The GRACE satellites have detected changes in the gravitational field over regions of Canada that can be attributed to the crust bouncing back after the melting of a glacier 20,000 years ago and convection in Earth’s mantle (Illustration: Science/M Tamisiea)

If it seems Canadians weigh less than their American neighbours, they do – but not for the reasons you might think. A large swath of Canada actually boasts lower gravity than its surroundings.

Researchers have puzzled for years over whether this was due to the crust there rebounding slowly after the end of the last ice age or a deeper issue involving convection in the Earth’s mantle – or some combination of the two.

Now, ultra-precise measurements taken over four years by a pair of satellites known as GRACE (Gravity Recovery and Climate Experiment) reveal that each effect is equally responsible for Canada’s low gravity. The work could shed light on how continents form and evolve over time.

GRACE, a joint mission of NASA and the German Aerospace Center, was launched into space in 2002. The two spacecraft fly 500 kilometres above the Earth, 220 kilometres apart. Using a microwave ranging system, the two spacecraft can measure distance differences between them as tiny as a micron.

That allows them to measure tiny changes in the distribution of mass – and hence gravity – on the Earth. For example, if the leading spacecraft were to encounter an area with more gravity, it would be pulled ever-so-slightly closer to Earth than the trailing spacecraft, and that distance can be measured.

A team led by geophysicist Mark Tamisiea, who performed the work while at the Harvard-Smithsonian Center for Astrophysics in Cambridge, Massachusetts, US, has now used GRACE to study the gravitational low over Canada’s Hudson Bay. Scientists first noticed this low in the 1960s, when the planet’s first global gravity fields were mapped.

At first, researchers suspected it was due to an ice sheet called Laurentide that blanketed a sizeable chunk of North America during the last ice age. In places, the sheet was more than 3 kilometres thick, and it depressed the Earth’s crust beneath it.

When the ice age ended about 20,000 years ago, the ice rapidly melted. But the crust has been springing back much more slowly, and it is rebounding today by about 12 millimetres per year.

But in the last decade or so, scientists have begun to suspect that convection in the Earth’s mantle, a layer of hot, flowing rock beneath the crust, also plays a role.

The sludge-like mantle rises and falls in plumes as it is heated from below and cooled from above. The mantle can drag the overlying tectonic plates with it as it moves.

GRACE cannot directly detect that movement since it is so slow. But scientists inferred the gravitational contribution of convection by subtracting the post-glacier effect from the region’s overall gravity signal.

“It’s a very good piece of evidence that allows us to look beneath the surface of the Earth,” says team member James Davis of the Harvard-Smithsonian Center for Astrophysics in Cambridge, Massachusetts, US. “It would be very hard for someone to say it’s 100% post-glacial rebound.”

Even after the Earth’s crust rebounds completely from the glacier melting, there may still be a gravitational low over the area due to mantle convection. That would suggest that even parts of a continent away from the tectonic plate boundaries are affected by mantle convection.

Ultimately, scientists hope to use such data to learn how continents form and evolve over time. “With this information, people could infer better whether the North America plate is actually predominantly stable,” says C K Shum, an expert on the Earth’s gravity at Ohio State University in Columbus, US, who was not a part of this study.

Using this same set of data, researchers have also found that there were two ice domes in the ice sheet on either side of Hudson Bay, given the features in the gravity field that have been left behind. The way the thickness of any ice cover changes at different periods could be used by climate modellers to understand past climate change.

“Where the ice formed, and how thick it was, is a clue to temperature, precipitation, and other weather/climate (for example, the jet stream) changes in the distant past,” says team member Jerry Mitrovica of the University of Toronto in Canada.